Return to RESOURCES AND ARTICLES

How much abuse can a sword blade really take? The photos here show what a sword blade can stand up to, by testing one of my rejected blades to (almost) destruction.
Why was the blade rejected? It had been heat treated and was in the final grinds, when I saw the fuller had been ground a bit too deep and I was about to grind a hole through one spot. There’s nothing to do in this situation except throw the blade away and start again, but rather than simply cut it up and throw it in the rubbish, I decided to test it to destruction and document the process. This is a production spring steel blade, heat treated like all the others I make; no special steels, heat treatments or careful selection – the blade selected itself.

Photo 1 shows the tang comfortably bending to 80 degrees from the angle of the tip. It bent in an even curve, showing that the cross sectional area reduces evenly along its length. It sprang back to straight from here, several times, with no sign of taking a set. Normally I wouldn’t even think of bending a blade this much.

I progressively pushed it further. Photo 2 shows a bend of 120 degrees, still with a fairly even curvature. This was getting to be hard work; I  was pushing hard to do this, and worried what would happen if my hand slipped. Making it harder was doing this with one hand while I took photos with the other! 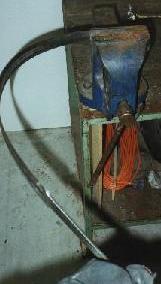 After the 120 degree bend, the blade had taken a slight set of 10 degrees, as shown in Photo 3. This indicates a small soft spot (or at least not as hard as the rest of the blade). Even this set could be repaired by carefully bending it the other way. Not bad considering I had expected the blade to fly apart by this point. 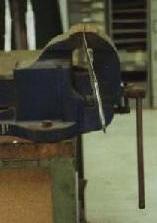 Now I had seen it take anything you could reasonably expect it to stand up to in combat conditions, it was time to push it to breaking point. I kept pushing the tang further around; at 150 degrees (Photo 4) it had a kink beside the jaws of the vice, and was making ominous tinging noises. 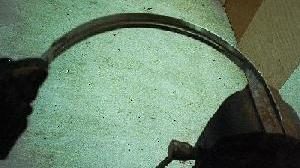 I pushed it past 180 degrees – more tinging noises, and a feeling of things starting to give way, but no snap. Unfortunately I needed both hands to get enough force on the tang so there are no pictures.

It had taken a large set now. I pushed it hard the other way too, but it just bent, no break. Photo 5 shows the 40 degree set it took, with a small set beside the jaws of the vice. I pulled it back until the blade was almost straight again (Photo 6) with only a slight curve in the blade, and gave up. The experiment had succeeded beyond my expectations, and the blade was still in one piece. 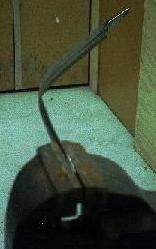 Permanent link to this article: https://swords.co.nz/articles-resources/sword-blade-test/